Kyrgyzstan is a landlocked country situated in the eastern part of Central Asia. Many ethnic groups live in this country but Muslims are the majority. It became part of the Russian Empire in the late 19th century. In 1991, the country gained independence and passed a new constitution in 1993. Kyrgyz politics originally took place in a semi-presidential, representative democratic republic. Here the executive power of the state is vested in the government. However, the power to make laws has been vested in both the government and the legislature.

Kyrgyzstan is not an economically viable country. The use of transportation has been affected due to the high mountains. Roads in Kyrgyzstan spiral down steep slopes. Many times one has to go through a pass at an altitude of 3000 meters above sea level. Roads here are at risk of landslides and snowfall. It is very difficult to travel at high altitudes in remote areas in winter. Horses are still used as a means of transportation in rural and remote areas. More than half of the people here speak Kyrgyz. Other languages spoken here include Mongolian, Uzbek, Chinese, and Uyghur. 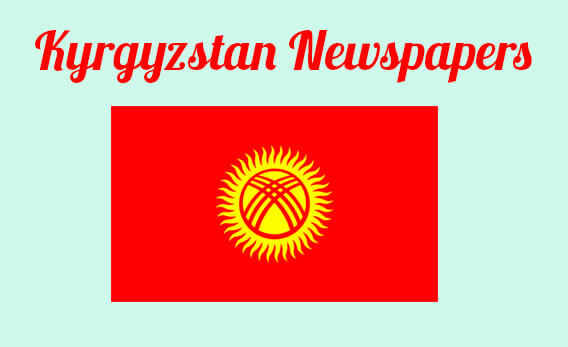 Azattyk Unalgysy is a very popular daily newspaper in Kyrgyzstan. Its goal is to promote democratic values and institutions as well as human rights. Mainly through the dissemination of information in countries where freedom of speech has not yet been established and has not been banned by the authorities. It seeks to achieve the highest standards of independent journalism and information coverage despite pressure and influence. Its Kyrgyz service makes every effort to ensure that all broadcast and other published material is realistically accurate.

Super Info is a leading expert newspaper in Kyrgyzstan. In this newspaper, you will find all the latest updates that you need daily. Also given here in the form of the section from which you can choose.

Vecherny Bishkek is an independent daily newspaper. It was started its journey on 1 January 1974Alexander Kim is the owner of this paper. The headquarter of this paper locates in Bishkek. An online copy is available from where you can also read the news.

Kabar is a national news agency in Kyrgyzstan. It was established in 1937 under the name of KyrTAG. Kubanichbek Tabaldiyev is the director-general of this agency. The organization signed a cooperation agreement with the Azerbaijani Trend International News Agency on November 8, 2013.

Kloop is a well-known media organization in Kyrgyzstan. Basically, it is known for its news websites and journalism investigations. Bektour Iskender and Rinat Tuhvatshin are the founders of this paper. It was founded on 3 July 2006. Kloop Media Foundation is the current proprietor of this paper.

Aki press is a very popular independent news agency. Its main purpose is to provide news and analytical materials. The headquarter situates in Bishkek, Kyrgyzstan. It monetizes the payments access to AKIpress archives and the sale of advertising space on its website. The agency’s websites publish between 500 and 700 political, economic, cultural, social, scientific, and sports news daily.

KyrTAG was first started its journey in 2010. Mainly it is a telegraph agency. Anyone can check the news published here online. Everything in this telegraph is published in the Russian language.

From today’s post, you have learned about Kyrgyzstan Newspapers and their News Sites. Don’t forget to give your feedback about this post through comments.