Today’s post details Lithuanian Newspapers, magazines, and describes the top news sites. The Republic of Lithuania is a country with abundant natural beauty and culture. It is an amazing country and one can easily fall in love with the country. It has gone through some amazing history, and a number of interesting places and traditions have survived to this day.

Lithuania is an independent nation with a single semi-presidential republican government. Lithuanian is the official and national language, but people are also fluent in English. Some speak Russian and Polish at the same time. Lithuania has moved from a command word economy to a market economy as a whole where the privately-owned sector is responsible for most of the gross domestic product.

Lithuania provides free state-funded professional medical care for all individuals and enlisted long-term residents. The education sector is also quite advanced and there are several universities which are always good in the field of science. This country is famous for having the only region in the world that is famous for its fragrance. The fragrance includes a number of wildflowers, raspberries, ginger, sandalwood, and musk with a sweet and even fresh feeling of cologne. Lots of tourists visit Lithuania every year for an amazing holiday trip. 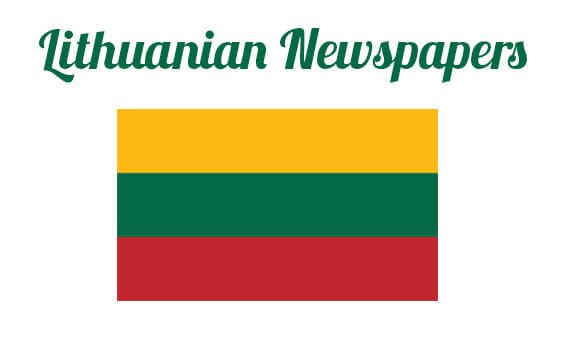 Lietuvos rytas is a daily morning newspaper in Lithuania. It was launched in 1990 on the basis of the “Komjaunimo tiesa” newspaper. It was printed on Tuesdays, Thursdays, and Saturdays in Vilnius. The paper is part of the “Lietuvos rytas” media group. The online version of the paper was launched in 2005. Its circulation in 2021 was 55,700 copies.

Respublika is a daily Lithuanian and Russian language newspaper. It was started its journey on 16 September 1989. The headquarter situates in Vilnius, Lithuania. Respublika Publications Group is the publisher of this paper. In March 2007, Ramunė Vaičiulytė became the first female editor-in-chief of this paper.

Verslo žinios is a business weekly newspaper in Lithuania. Bonnier Business Press is the 73% owner of this paper. It was featured in 1994. It has hosted conferences for 16 years, some of which are “Gazelė”, “Best internet”, “Password”, and others. There are currently 118 employees working for the newspaper.

Vilniaus diena is a compact format daily newspaper. Hermis Capital is the owner and Diena Media News is the publisher of this paper. Its circulation numbers are 10,000 weekdays and 16,000 Saturdays.

15 min (Penkiolika minučių) is one of the biggest news sites in Lithuania. This news portal reaches more than one million unique viewers every month.

Kurier Wileński is an A4 format daily newspaper. VšĮ “Kurier Wilenski” is the owner and UAB “Klion” is the publisher of this paper. It was founded in 1796. It covers all content in the Polish language. It has 24 staff writer for making content.

Kauno diena is a compact format daily newspaper. Diena Media News is the owner and publisher of this paper. It was established in 1945 by Orkla Media subsidiary Orkla Press. The paper’s daily circulation in 2005 was about 38,000 copies. Arūnas Andriuškevičius is the chief editor of this paper.

Vakarų ekspresas is the biggest regional newspaper in Lithuania. It had a daily circulation of 15,000–20,000 copies. It is covered daily, except Sundays. The paper was founded on 15 September 1990.

ELTA (Lietuvos naujienų agentūra) is a very popular news agency. It was launched in March 1920 in Kaunas by Juozas Eretas. GM Media Invest is the owner of this paper.

Today’s post will be useful for those who are interested in learning about Lithuanian Newspapers and the culture here. You can also check our website for the details of other countries’ newspapers.