In today’s post, we will discuss Japanese Newspapers and their news sites in detail where you can find links to Newspapers. Japan is an island nation located in East Asia and does not share any land borders with any country. Although Japan has no land borders, it does have maritime borders with South Korea, Russia, China, the Northern Mariana Islands, North Korea, Taiwan, and the Philippines. 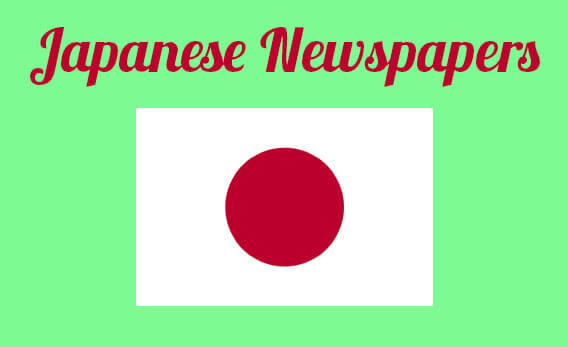 The Asahi Shimbun is a daily morning Blanket format newspaper. It was established on 25 January 1879 by Murayama Ryōhei and Ueno Riichi. Its circulation was 5.16 million for the morning version and 1.55 million until June 2020 for the evening version.

Nikkei Asian is a very popular Economic English language newspaper. It is the largest financial newspaper in the world, with a daily circulation of over three million. The paper was founded on 2 December 1876. Nikkei, Inc. is the owner of this paper.

Sankei Shimbun is a Blanket format daily newspaper. Takamitsu Kumasaka is the publisher of this paper. It was launched on 1 March 1882 as Jiji News and 20 June 1933 as Nihon Kogyo Shimbun. Normally it publishes in the Japanese language.

Yomiuri Shimbun was first started its journey in 1874. The headquarter locates in Otemachi, Chiyoda, Tokyo, Japan. Its morning circulation was 7.7 million. The paper is printed twice a day and in various local editions.

Nikkan Sports is a leading daily sports newspaper in Japan. It was established in 1946. This paper is normally published in both print and online formats. Nikkan Sports Newspaper Research Office is the owner of this paper.

Mainichi Shimbun is one of the leading newspapers in Japan. The Mainichi Newspapers Co. Ltd. is the owner of this paper. It was first launched on 21 February 1872. Masato Kitamura is the publisher of this paper.

Sports Hochi is a broadsheet format daily newspaper. Hochi Shimbun Co. is the present owner of this paper. It was launched in 1872. The headquarter of this paper situates in Minato, Tokyo, Japan.

The Japan Times Online is the biggest and oldest daily newspaper in the English language. News2u Holdings, Inc. is the current proprietor of this paper. There are about 130 staff writers here. It was founded on 22 March 1897 by Motosada Zumoto.

Sports Nippon is a print and online format daily newspaper. Sports Nippon Newspapers Company is the current owner of this paper. This is an authorized newspaper of the Mainichi Shimbun.

Sankei Sports is a broadsheet format daily newspaper. Sankei Shimbun Co. Ltd. is the owner of this paper. Its headquarter situates in Tokyo & Osaka. It had a circulation of 1,360,000 in 200. The newspaper is also known as Sanspo.

We hope you have benefited from knowing about Japanese Newspapers and country’s details from today’s post. Those who want to read the news directly online must click on the link given above.