In today’s post, we have brought for you a detailed description of Israeli Newspapers and News Sites. The country of Israel is situated in West Asia on the shores of the Mediterranean and the Red Sea. It shares borders with Syria, Lebanon, Jordan, the Palestinian Territories, and Egypt with a population of about 8.884 million. With a parliamentary system, Israel considers itself a liberal democracy. The legislature is the Knesset and the government is considered the prime minister of the head of state. The country is an OCED member and one of the 31st largest economies in the world by nominal GDP. In the Middle East, this country has the highest standard of living.

Israel ranks 6th in the World Economic Forum’s Global Competitiveness Report and 54th in the World Bank’s Ease of Doing Business Index. The country ranked 5th in the world for sharing people in highly skilled employment. The country’s major exports are military equipment, chemicals, agricultural products, raw materials, cut diamonds, software, and textiles. It is the second-largest startup company in the world and ranks third. It has 4 levels of education and three types of high schools. One is the Academic High School and the other is the Vocational and Technical High School. And the third is broad it offers both types of programs above. There is an interesting fact about the school here, the students call their teachers by their first name. Let’s find out about the newspapers in this country. 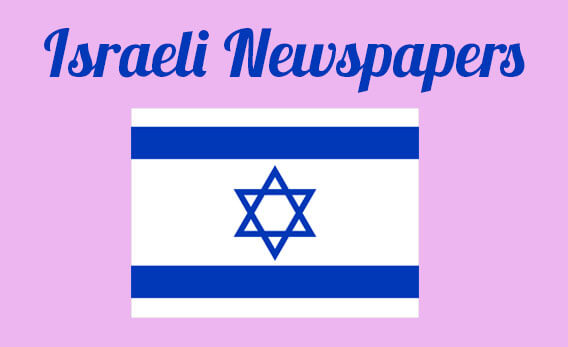 Haaretz is a Berliner format daily newspaper in both Hebrew and English. Schocken Family is the 75% and Leonid Nevzlin is the 25% owner of this paper. It was established in 1918 by the British military government in Palestine. You can read both Hebrew and English versions on the Internet. It is covered as a weekly newspaper in North America. It had a daily circulation of 72,000.

TheMarker is a daily business newspaper. But it also publishes as a monthly magazine. It was launched in 1999 by entrepreneur and journalist Guy Rolnik. Yoel Esteron is the chief editor. The paper is owned by Haaretz.

Globes is a tabloid format daily financial newspaper. Alona Bar-On and Anat Agmon are the owners of this paper. It was established in the early 1980s. The paper’s political alignment is centralist. Its headquarter situates in Rishon LeZion, Israel.

Al-Arab is a weekly newspaper in Israel. It was started its journey in 1987. The circulation number of this paper is 38,000. Its headquarter is situated in Nazareth. All news of this paper is covered in the Arabic language.

B’Sheva is a tabloid format weekly newspaper. Arutz Sheva is the current owner of this paper. It is read by 130,000 families and is rated as the largest propaganda newspaper in Israel’s religious sector. It was established on 19 July 2002.

Israel HaYom is a free daily national newspaper. Boaz Bismuth is the chief editor and Miriam Adelson is the publisher of this paper. It first appeared on 30 July 2007.

Times of Israel is a very popular English online newspaper. It was founded in February 2012 by David Horovitz and Seth Klarman. The paper publishes all content in English, Hebrew, French, Arabic, and Persian.

Jerusalem Post is a very popular English and French-language newspaper. It had a weekends circulation of 80,000 and an International circulation is 40,000. It was founded on 1 December 1932 by Gershon Agron.

Yedioth Ahronoth is a tabloid format national daily newspaper. It was launched on 11 December 1939 by Gershom Komarov. Yedioth Ahronoth Group is the owner of this paper.

Calcalist is a daily tabloid format business newspaper and website. Yoel Esteron is the chief editor of this paper. It was founded on 18 February 2008. Yedioth Ahronoth Group is the current proprietor of this paper. The headquarter of this paper situates in Tel Aviv, Israel. Normally it publishes in the Hebrew language.

I hope you are happy to know about Israeli Newspapers and its news site from today’s post. Those who are interested in learning about the culture and the country can find out by reading these newspapers.