You can find out about Iraqi Newspapers and their sites from today’s full post. Iraq is a Muslim country in West Asia. About 99% of the population here is Muslim, with a small minority of Christians. It is bordered by Iran to the east, Syria to the west, Turkey to the north, and Saudi Arabia to the south. To its south flow two significant rivers, the Tigris and the Euphrates. According to the 2018 census, the total population is 38.43 million. Socially, Iraq is a rich country with a rich heritage. Of all the Arab countries, it has the finest sculptors and painters. Along with all the traditional things here, its newspapers are also very popular all over the world.

Attractions for travelers in Iraq include Al-Kifl, Al-Quanah, Al-Ukhaidir, and Amadiya. Al-Kifl is a city in southeastern Iraq that is the main reason for the location of Ezekiel’s tomb. Every year thousands of Jews visit this place. Al Quanah is another attraction in southern Iraq that intersects the Tigris and Euphrates rivers. Visitors can go to the specific place where the rivers meet. Al-Ukhaidir is also called the Abbasid Palace of Ukhaidar and is located near Karbala. The town of Amadia is situated on a rugged hilltop which is 1500 m above sea level. So, the various attractions to visit are the King’s Tomb, Badinan Gate, the beautiful view from the top of the mosque, Market Street, Sulav Springs, and the town of Kani. 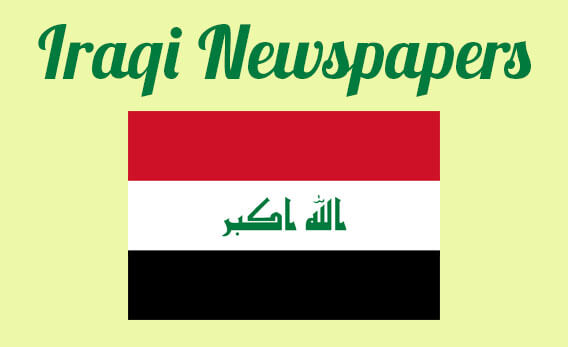 Shafaq News is a very popular Arabic language newspaper in Iraq. But you can translate it into English and Kurdish language. It features news such as economy, security, politics, sports, national & international, entertainment, and many more.

The headquarter of Hatha Alyoum locates in Baghdad, Iraq. With five main sources, it was first published in 2011. The service has been published in about 6,000 sources over the years including the official Iraqi website, according to local media in Iraq. Hatha al-Youm Publishing Ltd. is the owner of this paper.

Kitabat is a comprehensive independent electronic news newspaper. Mainly it deals with the news of Iraq and the world. This paper is available in the Arabic language. It features culture, business, economy, science, technology, lifestyle, art, and current updates.

Awena is a weekly newspaper published on Tuesday. It starts its journey in January 2006 by Asos Ahmed Hardi. The daily reported a circulation of 17,000 in 2009. This paper publishes its article in the Kurdish language. Its political alliance is independent.

Iraqi News is an online English language newspaper. It focuses on events in Iraq and the wider Middle East. It was first launched in February 2003. The paper has been mentioned thousands of times by other news vendors. The site describes itself as personal and does not provide any ownership or management information on the page about the site.

Al Sabah is a daily morning newspaper. Iraqi Media Network is the publisher of this paper. The headquarter of this paper locates in Baghdad, Iraq. After the fall of Saddam Hussein’s regime, it was founded in 2003.

Al-Mashriq is a leading daily newspaper. Sabah Al Lami is the editor of this paper. It was established in 2003 following the US invasion of Iraq. Except for Fridays, it is published daily. It covers all news in the Arabic language. The paper features business, art, health, medical, travel, and many more.

Hope you enjoyed learning about Iraqi Newspapers from today’s post. You can read the news directly from the newspaper’s website by clicking on each of the links given here.