Today’s post details Hungarian Newspapers, news sites, magazines, and describes the top news sites. Hungary is a landlocked republic in Central Europe, most of which is located in the Danube Valley. The Danube River flows through this plain and the city is the cultural and commercial center of Eastern Central Europe. Its current boundaries were defined by the 1920 treaty after World War I. They have improved in almost every field, from education, banking, economics, and the travel sector. 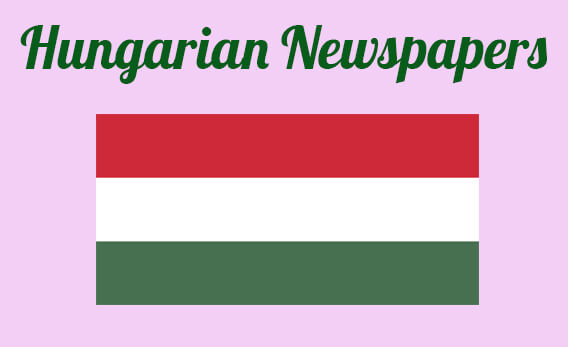 Blikk is a tabloid format daily newspaper. It was founded on 1 March 1994. The newspaper was originally owned by Szikra, but in 2004 the ownership changed to Ringier. The paper has no clear political affiliation. It is headquartered in Budapest. Ringier-Axel Springer is the publisher of this paper. The circulation of this paper is 150,000. It publishes all content in the Hungarian language.

Magyar Nemzet is a national daily newspaper. Gábor Liszkay is the owner and Ottó Gajdics editor of this paper. It was established on 1 September 2015 by Gábor Liszkay, Magyar Nemzet. Its political alignment is conservative. According to the report, Magyar Idak published an article criticizing “liberal, cosmopolitan and cosmopolitan culture”.

Népszabadság is a broadsheet format daily newspaper. It was started its journey on 2 November 1956. MediaWorks Hungary Zrt. (99.9%) and Vienna Capital Partners own the newspaper. Its main office locates in Budapest. András Murányi is the editor of this paper.

Nemzeti Sport is a Hungarian language newspaper. It is a popular Hungarian sport daily. Ringier of Switzerland is the owner of this paper. It had 95,111 copies in circulation that make it the fourth most-read daily in the country. It is considered one of the most reliable sources of sports information. Recently the online version of the paper has become increasingly sensational.

Népszava is the oldest popular newspaper in Hungary. It was founded on 20 May 1877 by Viktor Külföldi. Tamás Leisztinger is the owner and XXI. század Média Kft. is the publisher of this paper. Its political alignment is social democracy and the left.

Világgazdaság is a very popular business daily newspaper in Hungary. Mediaworks Hungary Zrt. is the owner of this paper. It is called “green newspaper” because it is published on green paper. It was launched in 1969 as weekly. Heti is the sister newspaper.

Vas Népe is a daily newspaper. It is owned by Mediaworks Hungary Zrt. It has a readership of about 185,000 and a print run of 60,000. Also, it is similar to many UK newspapers in that it serves as a weekly newspaper and magazine.

Mai Nap is a tabloid format daily newspaper. In its early days, it consisted of 24 to 32 pages and was published daily except Saturdays. Marcell Murányi is the chief editor of this paper. It had a circulation of 66,000 copies.

Magyar Hirlap is a compact format daily newspaper. Gábor Széles is the owner of this paper. It was founded in 1968. Its political alignment is conservative. In 2009, 27,769 copies of the paper were in circulation. Basically, it covers economical news.

Budapest Times is a very popular weekly newspaper. Budapest-Zeitung Kft is the owner of this paper. It publishes all content in the English language. It covers business, economy, lifestyle, and more.

Today’s post will be useful for those who are interested in learning about Hungarian Newspapers and the culture here.