In today’s post, you will find links to Guinea Newspapers and descriptions of the top newspapers. The Republic of Guinea is a country in West Africa, bordering the Atlantic Ocean. Guinea-Conakry also has the Los Islands from the capital Conakry. Conakry is home to more than 1.5 million Guineans and is a major coastal city. The media here was broadcast in French and various national languages. However, most of the written media uses only French. Guineans can get foreign newspapers in Spanish, English, and Portuguese. All the languages ​​mentioned in each region are on the radio for the convenience of everyone. It is the only way to reach all citizens irrespective of language. All electronic media in Guinea belong to the state, as there is no private radio or television in Guinea. 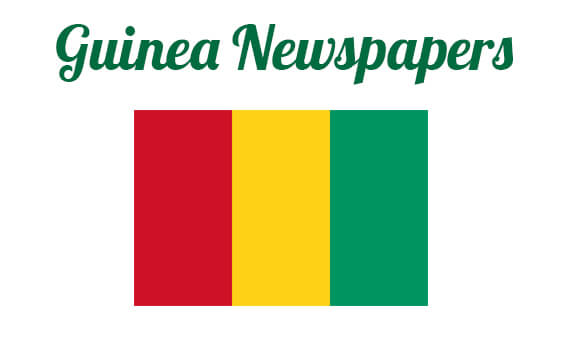 Guinee News is a very popular news website. It is dedicated solely to the news of the Republic of Guinea. It is the primary source of information about current events in Guinea. The news site was founded in 1997. It has technical & operational support staff in Canada and five full-time journalists in Conakry. Guineenews.org has it 20th anniversary in Conakry in October 2017.

Africa Guinee is a common information site in Africa and Guinea. It was launched in 2006 by Guinean journalist Mamadou Kaba Souaré. About fifteen employees are located mainly in Conakry and inland. It has become a benchmark site in French-speaking Africa. The information and analysis provided by this site is a reliable and trustworthy reference for politicians, Guinean institutions, agencies, researchers.

Guinee 7 is a trusted news site for Guinea. It covers news such as economic, political, social, advertisement, and cultural news from Guinea Conakry.

Media Guinee was first launched in 2010. This is a general information site in Guinea whose purpose is to provide information. It locates in Bonfi, Conakry. It covers politics, society, culture, economy, and more.

‎Foot 224 is a sports information site. It started out as a successful blog for Guinean football fans. One month after it went online in 2013, the blog recorded over 5,500 visits to Guinea football news articles. It made TV through shows that were launched year after year. It was established in May 2013 by Alhassane Diallo, Thierno Amadou Makadji, and Sékou Koutoubou Kaba.

Conakry Infos is an information portal on daily realities in Guinea and the rest of the world. It was started its journey in 2010. It is credible to ethics and professional conduct. This site relies on a solid network of professional journalists living in Conakry. It covers news such as politics, economy, sports, culture, society, technology, and international updates.

Le Lynx is a leading weekly newspaper in Guinea. This is also a satirical newspaper. Souleymane Diallo is the founder-director of this paper. It is modeled after the French satirical publication Le Canard enchaîné. Williams Sassine is the editor of this paper.

From our website, you will get all the updated lists and details of Guinea Newspapers. You will find links to all the newspapers from where you can read all types of news directly.