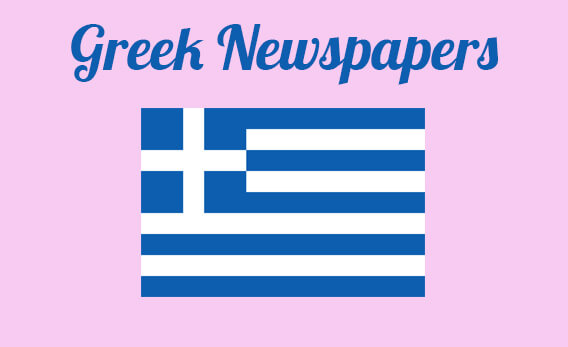 I Avgi is a greek language newspaper. This newspaper is called “Left Morning Newspaper”. It is politically linked to Syria. It was published in 1952. Avgi S.A is the owner of this paper. It publishes news such as policy, economy, society, international news, sports, and more.

Kathimerini is a broadsheet format daily newspaper. It was first launched in 1919 by Georgios Vlachos. Kathimerini Publishing S.A is the owner of this paper. The headquarter locates in Neo Faliro, Greece. Themistoklis Alafouzos is the publisher and Alexis Papahelas is a managing editor of this paper. It retains a traditional layout, with its original Griffin logo.

Ta Nea is a compact format daily newspaper. Alter Ego Media S.A. is the owner of this paper. Its political alignment is center-left, pro-Europeanism. It was founded on 28 May 1931 by Dimitrios Lambrakis. The circulation of this paper is 35,000. It is the best-selling Greek newspaper for decades. Although the financial and the Internet crisis have affected its circulation.

To Vima is a daily Greek language newspaper in Athens, Greek. Alter Ego Media is the publisher of this paper. It was started its journey in 1922 by Dimitris Lambrakis. Its political alignment is center-left, pro-Europeanism. Lambrakis Press Group is the owner of this paper. It is historically a newspaper where prominent politicians usually gave interviews or wrote articles.

Naftemboriki is a daily financial newspaper in broadsheet format. It was established in 1924 by brothers Panos and Giorgos Athanasiadis. The headquarter locates in Pireaus, Greece. By 2021 the newspaper had been acquired by businessman Dimitris Melissanidis for 7 million euros through an auction.

Dimokratis is a daily regional newspaper. Originally it is published on the island of Lesbos. It was started its journey in 1928 by journalist Terpandros Anastasiadis. The paper is with centralist political alignment.

Rizospastis is a daily newspaper in Athens, Greek. It was founded in 1916. Mainly, it is the official paper of the Communist Party of Greece. Its political alignment is communist and Marxist-Leninist. Liana Kanelli is the senior editor of this paper.

Kathimerini is a daily broadsheet format newspaper. It is a financial and political morning newspaper. Kathimerini Publishing S.A is the current owner of this paper. It was first appeared on 15 September 1919 by Georgios Vlachos.

Stochos is a national weekly newspaper in Greek. It was launched in 1985 by Georgios Kapsalis. The newspaper has now changed some of its policies regarding the rejection of all political parties. It covers varieties of news such as national and international.

Those who are interested in reading about other country’s newspapers can find out about Greek Newspapers from today’s post.