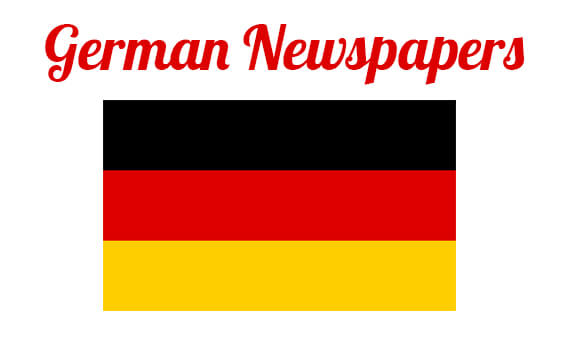 Süddeutsche Zeitung is one of the largest newspapers in Germany. It is a Nordisch format daily newspaper. It was founded on 6 October 1945. The paper is owned by Südwestdeutsche Medien Holding. The headquarter locates in Munich, Germany. Its political alignment is progressive liberalism, center-left.

Frankfurter Allgemeine Zeitung is a daily newspaper in Nordisch format. It was first launched on 1 November 1949. Fazit-Stiftung is the owner of this paper. Its print copy circulation is 201,408 in 2021 and digital circulation is 56,000 in 2020.

Bild is a very popular German-language newspaper. It is a daily tabloid except for Sundays and public holidays. It was founded on 24 June 1952. Axel Springer SE is the owner of this paper.

Die Welt is a national daily newspaper. The paper is owned by Axel Springer SE. It was established on 2 April 1946 by the British occupying forces. The headquarter locates in Berlin, Germany.

Frankfurter Rundschau is a tabloid format daily newspaper. It is 90% owned by Zeitungsholding Hessen and 10% owned by Carl-Gerald-Stiftung. It was founded on 1 August 1945.

Der Tagesspiegel was first appeared on 27 September 1945 by Walther Karsch, Erik Reger, and Edwin Redslob. It is the only main newspaper in the capital with a circulation of 148,000.

Die Zeit is a broadsheet format weekly newspaper. It was established on 21 February 1946. Its headquarter locates in Hamburg. Giovanni di Lorenzo is the present editor of this paper.

Handelsblatt is a compact format business newspaper. Verlagsgruppe Handelsblatt is the propietor of this paper. It was founded on 16 May 1946 by journalist Herbert Gross. It publishes all content in the German language.

die tageszeitung is a berliner format daily newspaper. It was founded in 1978. This German-language newspaper locates in Berlin. It focuses on current social issues, politics, such as inequality, environmental crises both local and international, and issues not covered by other traditional and conservative newspapers.

Neues Deutschland is a Rhenish format daily nrespaper. It was launched on 23 April 1946. The circulation of this paper is 17,831. Wolfgang Hübner is the chief editor of this paper.

Those who are interested in reading about other country’s newspapers can find out about German Newspapers from today’s post.