Today’s post details Estonian Newspapers and describes the top news sites. The Republic of Estonia is a land of abundant natural beauty. It is located in the northern European region and is a very peaceful country. It is an island country and has at least 2000+ islands. This is an independent nation with a single parliamentary republican government. Tallinn is the capital of the country and one of the most scenic cities in Europe. Although Estonian is the official language, most of the people here are fluent in English.

The Estonian education sector is much improved. About 100% of the people here are educated. There are plenty of opportunities for both domestic and international students. Also, they have contributed a lot to science and technology and have built a very good infrastructure. They have constantly upgraded themselves with modern trading systems. And makes a lot of money by producing as opposed to supplying electricity. 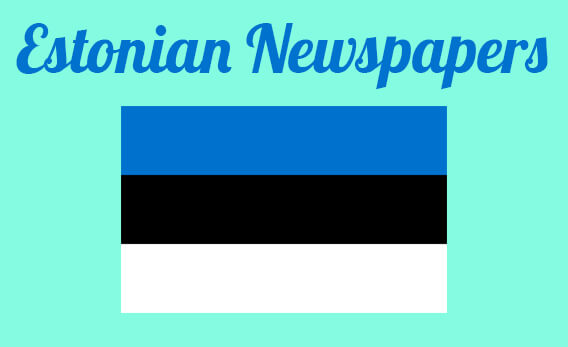 Äripäev Berliner format daily financial newspaper. Bonnier Group is the owner of this paper. It was established in 1989 by Dagens Industri. Meelis Mandel is the chief editor and Igor Rõtov is the managing editor of this newspaper. The headquarter locates in Tallinn, Estonia. It has been published five times a week since 1996.

Õhtuleht is a daily biggest newspaper in Estonia. It covers all articles in tabloid format and Estonian language. It was launched in 1944. Schibsted and Ekspress Grupp are the owners of this paper. It is now becoming an online news stream and an entertainment hub with almost. It currently has about 150,000 users.

Eesti Päevaleht is a leading daily newspaper. Mihkel Reinsalu is the managing editor, Külli-Riin Tigasson is the Opinion editor, Kristi Vahemaa is the Sports editor, and Merike Pinn is the Photo editor of this paper. It was established on 5 June 1995. AS Ekspress Grupp and Jaan Manitski are the current owners of this paper. The daily circulation of about 36,000.

Kuldne Börs was a classified telehot, published in Tallinn in 1992-2013. it has been available on the web as a database since 2013. AS Sonoma Baltics were the last publisher of this paper.

Eesti Ekspress was first launched on 22 September 1989 by Hans H. Luik and others. This weekly newspaper is published by AS Eesti Ajalehed. In March 2010 the newspaper moved to a magazine-like format similar to that of Der Spiegel and Stern.

Lääne Elu covers the economy, culture, sports, national & international news, politics, and more. It was first launched in 1989. It publishes all content in the Estonian language.

Sakala is a compact format daily newspaper. AS Ühinenud Ajalehed is the present owner of this paper. It was founded on 11 March 1878 by Carl Robert Jakobson. Peep Kala is the publisher and Hans Väre is the editor of this paper. The circulation of this paper is 8900.

Uma Leht is an A3, 4 pages format fortnightly newspaper. The paper was founded in 2000. Foundation Võro Selts VKKF is the current owner of this paper. It has 10,000 fortnightly circulations.

Delovye Vedomosti is a Berliner format weekly newspaper. Bonnier Group is the owner and AS Äripäev is the publisher of this group. It was first launched on 27 November 1996. Although it is an Estonian newspaper, it is printed in the Russian language.

Today’s post will be useful for those who are interested in learning about Estonian Newspapers and the culture here. You can also check our website about newspapers from many more countries.