From today’s post, you can learn about Czech Newspapers and news sites. The Czech Republic is a landlocked state in Central Europe. The country is bordered by Austria to the south, Poland to the northeast, Germany to the west, and Slovakia to the east. It is a welfare state with universal healthcare, a European social model, and tuition-free university education. The largest city and capital in the center of the country is Prague. It is the ninth peaceful and secure country and the 31st in democratic governance. Journalists and media here enjoy some freedom. But there are restrictions against writing in support of racism, Nazism, or violations of Czech law. The best-selling daily national newspaper is Blesk with a daily average readership of 1.15M. There are also Mladá fronta DNES, Právo, and Deník. 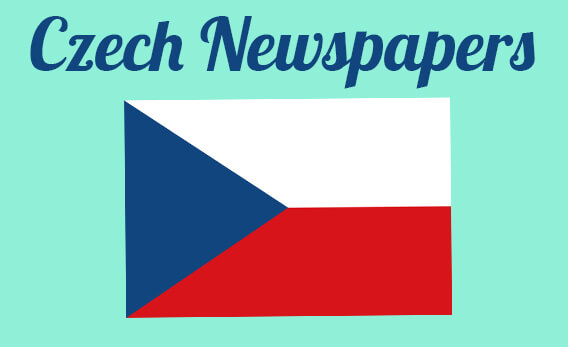 Mladá fronta DNES is a daily Berliner format newspaper. MAFRA, a.s.  is the owner and Jaroslav Plesl is the editor of this paper. It was started its journey in 1945. Its political alignment is a right-wing conservative, neo-liberal. In the age of socialism, it was the newspaper of the Youth Socialist Union. The newspaper basically consists of four sections, one of which has regional content.

Blesk is a daily newspaper in Prague, Czech. It was founded on 14 April 1991. Czech News Center is the owner and Radek Lain is the chief editor of this paper. It publishes all news in Czech language. The circulation number of this paper is 305,600. Its sister newspaper aha!

Deník is a tabloid format daily newspaper. It was established in 2006. Penta Investments is the current owner of this paper. The circulation number of this paper is 204,084. Earlier, it was owned by Verlagsgroup Passau.

Aha! is a daily newspaper that is published in the Prague language. It was founded on 1 October 2004. Czech News Center is the proprietor of this paper. It has a circulation of 88,671 in 2011. It covers varieties of news such as politics, sports, education, entertainment, business, and more.

You can find all the links and descriptions of Czech Newspapers and their news sites on our website. Each link given here is the official website of the newspaper.