For those who regularly read newspapers from their own country as well as other countries, today’s post is written about Croatian Newspapers. By reading the newspapers they will be able to learn about the current situation in Croatia, the culture, the political situation, and more. 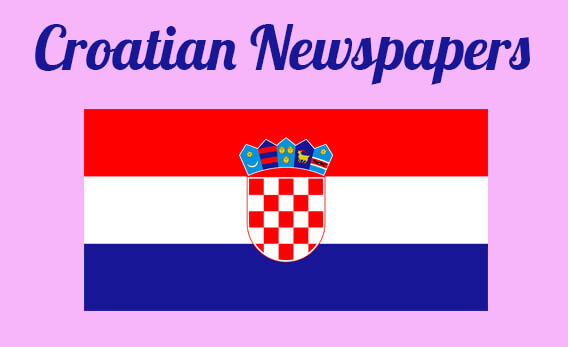 Jutarnji list is a daily Berliner format newspaper. It was founded on 6 April 1998. Since the 1950s it has become the first successful Croatian daily newspaper. Marijan Hanžeković is the current owner and Hanza Media d.o.o. is the publisher of this paper. Political coordination is social democracy and Liberalism. Normally, it publishes in the Croatian language. The circulation of this paper is 66,000. The paper quickly gained a majority share in the Croatian media market and became one of the most read newspapers in the country. It sold more than 214 million copies in its first five years.

Sportske Novosti is a daily sports newspaper in Croatia. Europapress Holding is the proprietor and Sportske Novosti d.d. is the publisher of this paper. It was launched on 9 August 1945 as weekly. The headquarter of this paper locates in Zagreb, Croatia. It has a circulation of 50,000. It has been published six times a week since 1967. This paper won some awards for writing awesome content.

Slobodna Dalmacija is a Berliner format daily newspaper. Hanza Media is the owner and publisher of this paper. The headquarter situates Hrvatske mornarice 4. It was established on 17 June 1943. Sandra Lapenda-Lemo is the editor of this paper. It features sports, culture, literature, architecture, business, policy, and more.

Zadarski list was first launched on 3 November 1994. The chief editor of this daily newspaper is Luka Perić. It publishes all articles in the Croatian language. RTD d.o.o. is the publisher of this paper. The circulation of this paper is 3,500. It has become a comprehensive coverage of events in Croatia and around the world.

Glas Koncila is a compact format weekly newspaper. Archdiocesan Cathedra in Zagreb is the owner of this paper. It was founded on 4 October 1962. The circulation number of this paper is  140 000. Branimir Stanić is the editor of this paper. The headquarter situates in Zagreb, Croatia.

Poslovni Dnevnik is a business-based daily newspaper. It was established in March 2004. Styria Media Group is the current owner of this paper. The headquarter of this paper locates in Oreškovićeva 6H/1, Zagreb, Croatia. It publishes all business and other news in the Croatian language. The print version is featured five times a week i.e. Monday to Friday and is printed on peach-colored paper. It has printed the Croatian language edition of The International Weekly since May 2010.

Narodne Novine publishes laws, appointments, regulations, and official decisions and makes them public. It is the oldest official gazette of the Republic of Croatia. The eponymous public company is the publisher of this paper. It was established on 6 January 1835 by Ljudevit Gaj. The paper has changed several names over the years. It publishes all content in the Bosnian language. It features news like anti-corruption, commercial, logistic, and many more.

Stay tuned to our website and get regular updates of other newspapers like Croatian Newspapers. For your convenience, online news links of all news sites have been provided.