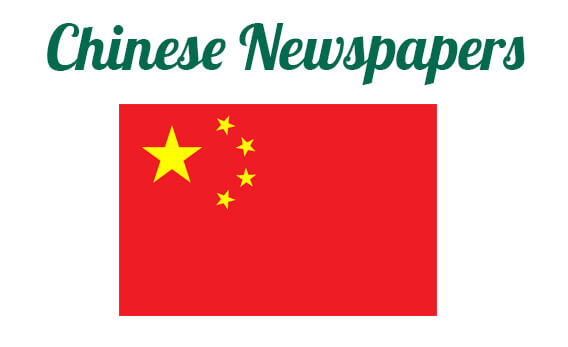 People’s Daily is the biggest daily newspaper group in China. The Central Committee of the Chinese Communist Party is the current owner of this paper. It was founded on 15 June 1948. Normally, it publishes in Chinese and other languages. Its political alignment is the Chinese Communist Party. Newspaper articles in this newspaper are often not read for content like transfers. It focuses on Chinese culture, China travel guides, China news, China society, China politics, China military, foreign affairs, and more.

Global Times is a tabloid format daily newspaper. People’s Daily is the owner and publisher of this paper. It was founded in 1993 as a Chinese language weekly publication. But an English version of it was launched on April 20, 2009. Hu Xijin is the editor-in-chief of both the English and Chinese editions. The English language edition of the paper has also launched two local versions.

Reference News is published by Xinhua News Agency. It was established on 7 November 1931. It was the only official channel for the Chinese public before the 1970s. The paper has also been published in Korean, Uyghur, Kazakh, and Mongolian languages for ethnic minorities in China. The circulation of this paper dropped from 11 million in 1980 to 4 million in 1985.

Workers’ Daily is a nationwide simplified Chinese language newspaper in China. All-China Federation of Trade Unions is the present owner of this paper. The circulation number of this paper is 2,200,000. It has been featured since 1946, publishing economic news in China. It covers trade union, education, health, culture, enterprise, military, painting, and calligraphy.

China Daily is a broadsheet format daily newspaper. It has the highest circulation of any English-language newspaper in China. The principal editorial office and headquarter locates in Chawang District, Beijing. After a month of trial, it was officially launched on 1 June 1981. Chinese Communist Party (State Council Information Office) is the proprietor of this paper.

Economic Observer is a both Chinese and English language newspaper. It was started its journey in April 2001. The online version was relaunched in March 2007 and offers customers access to all newspaper content. Most of the weekly newspaper articles also appear on the website for free. Only with web content, which includes op-ed pieces and comments from guest columnists.

In this article, you will find all the links to Chinese Newspapers and descriptions of the top newspapers. Today’s post is helpful for those who are interested in reading Chinese news and learning about it.