This is an incomplete list published in Botswana Newspapers. It is a dynamic list and can never meet special standards for completeness. Botswana is a country in South Africa, with Zambia to the north, Namibia to the north and west, Zimbabwe to the east, and South Africa to the southeast and south. Administratively, the country is divided into four town councils and nine districts. The country has fueled the expansion of diamond mining operations and is currently responsible for one-third of GDP and four-fifths of export earnings. The rate of HIV disease is the highest in the world and weakens Botswana’s significant economic growth.

The Botswana school system was built from the British model. This system is considered one of the best for African countries in the continent in terms of both access and quality of education. The linguistic situation in the media is recorded similar to what happens in the administration, English is preferred in writing and orally in Tswana. In fact, newspapers are usually published in English. Some foreign newspapers featured in Portuguese, French, or Arabic are sold in the capital, but in very small quantities. Usually, the national radio here broadcasts its programs in English and Tswana and some news reports are broadcast in Kalanda. For television, programs made in Botswana are broadcast in the Tswana language. But outside productions are presented entirely in English but sometimes with subtitles in Tswana. 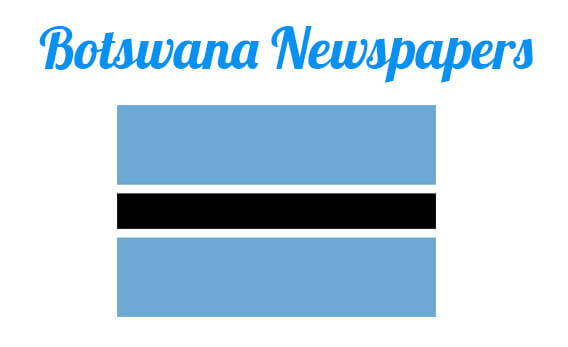 Botswana Guardian is a weekly newspaper that publishes in the English language. The first issue date of this paper is 1982. CBET Ltd is the publisher of this newspaper. The headquarter of this paper locates in Gaborone, Botswana. It is especially recognized for its fearless and groundbreaking reporting in business and political news. It also publishes articles on various news items such as sports, business, politics, and education.

Mmegi is a tabloid format weekly Friday national newspaper. Mmegi Investment Holdings is the owner and Dikgang Publishing Company is the publisher of this paper. It was started its journey in 1984. The headquarter of this paper locates in Gaborone, Botswana. Ryder Gabathusi is the editor of this paper.

Patriot on Sunday is a weekly newspaper that publishes on Sunday. Mpho Balopi is the owner of this paper. It was established in 2012. Although it is a Botswana magazine, it is published in English. Due to its negative attitude towards the ruling party, the newspaper became embroiled in a Press of Freedom dispute with the printing and publishing company Botswana.

BotswanaPost is a very popular postal service. It’s a communicational Gov. company. It was started its journey in 1989. Nathan Kgabi is the Chairman of this company.

The Voice is a tabloid format newspaper. Emang Bokhutlo is the chief editor of this paper. To develop a creative writing identity the overall journalistic style encourages the journalist. The number of readers is 30,000 copies per edition, where most people have stories of interest. It has received several awards. It has adopted a tabloid format which means big pictures, short stories, and bold titles.

The Botswana Gazette is a daily online newspaper. Its circulation number is 20,000 per week. Lawrence Seretse is the editor of this paper. It features lifestyles, sports, the latest news, and many more.

The first issue date of Kutlwano Magazine is 1962 by the Government of Botswana. It includes market news, entertainment, government policies, and feature articles. It is published in the daily news in Botswana as well.

Those who are interested to know and reading about Botswana Newspapers can know the details from this post. In this way, always stay with us for the latest updates of newspapers of all other countries.