Newspaper is an important medium for any kind of news in today’s world. This newspaper is one of the means of getting any kind of news such as current affairs, sports, business, politics, lifestyle, entertainment, travel, education, and more of the present time. Each country has its own printed newspaper. However, in the current era, the demand for the printed newspapers as well as online websites is much higher. Bolivia’s Plurinational State is an amazingly scenic country in the West American region. Bolivian Newspapers are a great medium for getting the latest news on this country. Most of the newspapers of this country are written in the Spanish language. 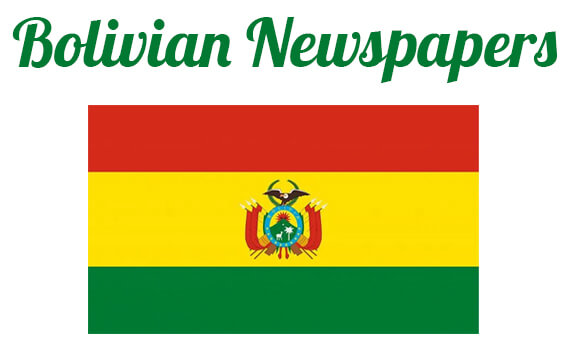 Bolivia has very developed in all sites as well as the media industry. There are daily, weekly, and yearly newspapers and magazines are available in this country. Let’s have a look at Bolivian daily newspapers.

El Diario is a daily newspaper in La Paz, Bolivia. It is the oldest newspaper in Bolivia and was established in 1904. Antonio Carrasco G. is the owner of this newspaper. It is written in Tabloid format.

Los Tiempos was established on 16 September 1943. It is a daily newspaper in Cochabamba, Bolivia. Demetrio Canelas was the founder of this newspaper. It publishes in the Spanish language and written in Berliner format. It features the latest news, economy, sports, business, science, education, health, environment, and technology.

La Patria was founded in 1919. It is the oldest leading newspaper in Bolivia. The newspaper covers varieties of news such as politics, economy, technology, health, education, environment, science, and sports.

El Deber was founded in 1953 in Santa Cruz de la Sierra, Bolivia. Grupo El Deber is the owner of this paper. This daily newspaper publishes in Tabloid and written in the Spanish language.

La Razón is a daily newspaper in Madrid, Spain. It was established in 1998 by Luis Maria Ansón. The owner of this newspaper is Grupo Planeta. It covers all types of national and international latest news. It publishes in tabloid format. Mauricio Casals is the publisher of this paper.

El Mundo is a famous newspaper in Madrid. It was founded on 23 October 1989 by Pedro J. Ramírez. It publishes in the compact and Spanish language.

Página Siete was established on 24 April 2010. It is a daily newspaper and publishes in tabloid format. The headquarter of this newspaper is La Paz, Bolivia. The paper mainly covers economics and politics. Besides it also has cultural and social sections.

Urgente BO is a leading well-known newspaper in Bolivia. It covers varieties of news from national and international.

Now time to see the news sites and newspapers of Bolivia. All newspaper’s name and the link provided below. If you want to know the daily update of the Bolivian then these all are the perfect ways to getting any update.

All news sites of Bolivia always publish authentically and real news. If you have any questions about this article then let us know in the comment section.