Newspapers are one of the means of getting any kind of news in one’s own country and all over the world. We can’t imagine a day without newspapers. Unprecedented advances in technology have made it possible for us to read print copies as well as newspapers online. Cambodia is a Southeast Asian country. The Cambodian economy is largely dependent on agriculture. Cambodia newspapers and media have reached another height. In fact, the country enjoys media freedom and the number is growing.

Cambodian media refers to broadcast, print, and online media. All of them have taken the media across the country. Newspapers enjoy amazing flexibility within the country. More than 100 newspapers are available in Cambodia. However, not all of them are published every day. In fact, many of them cannot maintain a regular release schedule for many reasons. Several languages ​​are used in newspaper publishing and English newspapers are in good condition in Cambodia. Get from the list of the latest breaking news and newspapers about Cambodian people, tradition, history, education, health, business, politics, and the economy. 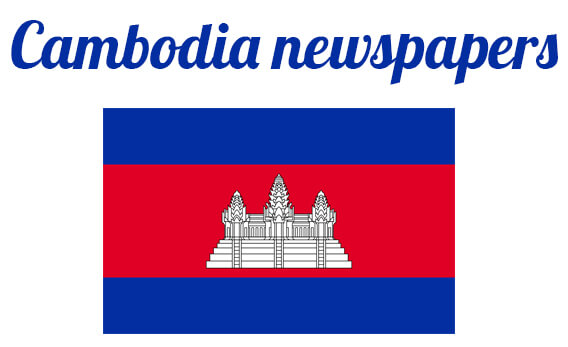 Cambodia is very developed in its media industry. More than 100 leading newspapers publish varieties of the latest news in this country.  So, let’s check some of the popular newspapers in Cambodia.

Koh Santepheap was founded by Chou Thany in 1967 in Phnom Penh, Cambodia. It is a weekly and the most widely-reading newspaper in Cambodia. It is written in the Cambodian language. The format of this paper is print, online. The newspaper features varieties of news such as politics, economy, education, life & society, entertainment, travel, technology, business, and sports.

NokorWat News is the oldest and first newspaper in Cambodia. The headquarter of this newspaper in Phnom Penh, Cambodia. Day by day the newspaper is updated its Website magazine and Social media sites. It publishes all articles in the Khmer language. It covers varieties of the latest national and international news.

DAP News is one of the fastest-growing and social information sites in Cambodia. It is part of headline media. The main passion of this newspaper is to be confident in making informed about social and other valuable information for yourself and your loved ones. Every article writes in a very easy way so that everyone understands it very easily.

Phnom Penh Post is a daily newspaper founded in 1992. It is written in print, an online format in the English and Khmer language. The newspaper achieves varieties of awards from different categories. Sivakumar Ganapthy is the present owner of this newspaper.

Kampuchea Thmei Daily is a well-known daily newspaper in Cambodia. The headquarter of this newspaper is in Phnom Penh. The newspaper mainly features the topics of politics and business.

VOA Khmer founded in 1942 as a service of radio news. Day by day it is getting popular and launched its broadcast service. At present, it has television, web, and radio. Now it is one of the biggest broadcasters of Khmer-language in the world. It broadcasts all types of the latest news from national and international.

Cambodia Daily was founded by Bernard Krisher in 1993. It is a leading newspaper and published six times a week. The newspaper publishes in Khmer and English language. It has both print and online media.

Watphnom News is a leading and popular newspaper in Cambodia. It is a daily newspaper and written in the Khmer language.

Rasmeinews is a daily and largest newspaper in Cambodia. It publishes in the Khmer language and established in 1993. It circulates almost 18,000 copies per day. The format of this newspaper is print, online.

Now I give some daily  Cambodian newspapers names. All are leading and popular newspapers in this country. So, let’s have a look.

This post provides all types of current news sites in the Khmer and English language of Cambodia. If you have more queries about this post then let us know in the comment section.