From today’s post, you will find the list, description, and link of Barbados Newspapers. Barbados is an island nation in the West Indies in the Caribbean Sea. It is the easternmost of the islands in the Caribbean Sea. Barbados has been a British colony for almost three centuries. It gained freedom from the United Kingdom in 1967. The country typically experiences two seasons, which include significantly more rainfall. The first “wet season” period mainly runs from June to December. In contrast, the second “dry season” basically lasts from December to May.

The economy of this country was dependent on sugarcane cultivation and related activities. British colonial heritage, like other Caribbean countries, cricket is very famous on the island. The West Indies cricket team usually consists of several Barbadian players. Although small in number, there are some very popular print media. Where regular country and foreign news and other issues are printed. One of the great advantages of this is that you can read newspapers from anywhere in the world on an online website.

You May Check More: Bahrain Newspapers 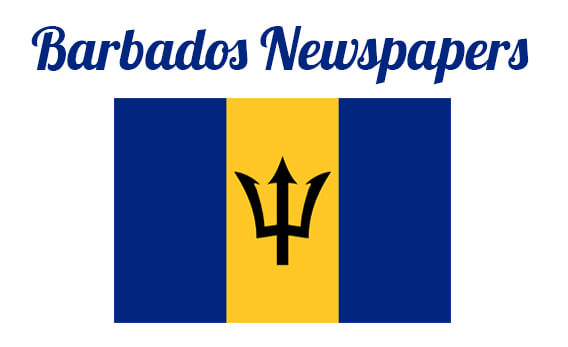 Some of the most notable newspapers in Barbados are discussed in detail here. Where you can find its release date, publication number, owner, features, and much more.

The first issue date of Barbados Advocate was in 1895. It is the second most influential daily newspaper in Barbados. It covers a wide range of topics including entertainment news, business, sports, politics, editorial, and special features. In addition, this paper covers investigative journalism, as well as regional, local, and international news every day. The paper is headquartered in the St. Michael area, in Fontabelle, west of the capital, Bridgetown. The paper was owned in 2000 by Anthony T. Bryan. Its performance was frozen at 7,000 and 12,000 Sundays.

Barbados Gazette is a governmental Gazette. Since 1966 the paper has been published in Bridgetown. Mainly, it is the official communications arm of the Barbados Govt. The headquarter of this paper locates in Old Town Hall, Cheapside, Barbados. Its publishing department also provides press coverage of some foreign activities of the government.

Caribbean Broadcasting Corporation (CBC) is a very popular TV and radio broadcaster. The Barbadian Government is the owner of this paper. It was started its journey in 1963 as Radio. The TV service broadcasts on Channel 8 which is the only legally licensed. The corporation also operates and owns three radio stations. In addition to terrestrial radio and television, it operates a wireless cable TV subscription. Which service is called Multi-Choice TV. It supplies many television stations around the world, including the United States, the Caribbean, Canada, Latin America, and Europe.

Caribbean News Agency (CANA) is a popular print and broadcast media outlet. It was established in 1975 as the successor to the former Reuters Caribbean service. The famous Stake-holding media companies share their own content with CANA. Which will enter the stories and articles of other media houses.

Below are the names of some more Barbados newspapers with links. You can read the current news directly from the website just by clicking on the link.

You can find all the updates of Barbados Newspapers and the link to read the news directly online in this article on our website. This website is for those who prefer to read online news from print copy.