The Republic of Austria is a peaceful country with plenty of mountains, animals, natural beauty, and castles. It is situated in the Central European region. The very scenic course is of course characterized by rocky terrain, alpine villages, and even baroque structures. The education sector of this country is much improved here. It is compulsory for Austrian children to go to school effortlessly with the age of 6, in addition to 10 years of starting a grammar school. Technical institutes are very famous and there are six work colleges and more than 10 universities around this country. Like all other sectors, its media sector is much more advanced and elegant. Many newspapers are printed in its print sector. Today’s content on our site is arranged with details of Austrian Newspapers and online links. Each link given here is given directly to the link given on the website. 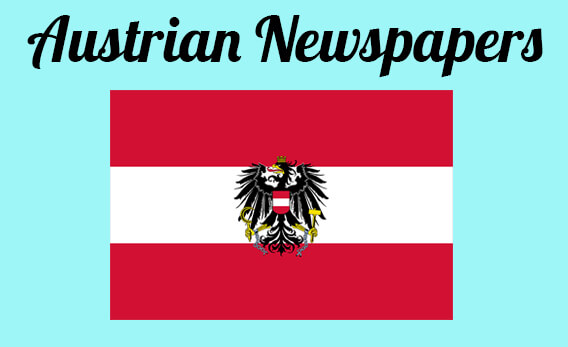 Kronen Zeitung (Krone) is a daily tabloid format newspaper. It was established on 2 January 1900 by a former army officer Gustav Davis. Hans Dichand†, WAZ-Mediengruppe is the current owner of this paper. This Austrian biggest newspaper is known for being Eurosceptic. Its political alignment is populism, right-wing populism, and conservatism. The headquarters of this paper locates in Vienna. Krone Multimedia GmbH & Co KG is the publisher of the paper.

Heute is the fastest news portal in Austria. It is a daily newspaper with all news and backgrounds from the latest, politics, countries, sports, lifestyle, and more. Basically, it publishes in the German language.

Oberösterreichische Nachrichten is a broadsheet format newspaper. This independent paper publishes all content in the German language. It appeared on 11 June 1945. The head office of the paper is in Linz. Wimmer Medien is the publisher of this paper. The average circulation of the paper was 127,000 copies. It covers sports, culture, politics, current updates, education, and more.

Österreich is a national German-language newspaper. Mediengruppe Österreich GmbH is the propietor of this paper. It was started its journey on 1 September 2006. Wolfgang Fellner is simultaneously the founder, publisher, and editor of this paper. Its political alignment is Conservatism. It has launched other Austrian publications, including News Magazine.

Salzburger Nachrichten (SN) is a broadsheet format newspaper. It was founded in 1945. Normally, it prints from Monday to Saturday. It contains daily technology and science news. The paper has a conservative and Christian-liberal position.

Read this article to know more about Austrian Newspapers and to read live news. If you have any questions after reading the whole, you can ask without hesitation.