A list of popular Andorra Newspapers in Catalan, French, Spanish, and English can find on our site. Andorra is a country located in the Southeast European region. Andorra is a small kingdom located on the summit of the Pyrenees in southwestern Europe. The place is a traveling hot spot which is also a landlocked country. It is a small country with about 80,000 inhabitants. It is highly economically developed that relies heavily on tourism. With around 10 million tourists visiting annually, Andorra is fascinated by the duty-free location and their major summer resorts. It is not only rich in the tourism industry but also its media sites are much improved. And many people are interested in the news sites of different countries. On our site, you get regular updates of newspapers from different states. Today’s post details Andorra’s important news site.

Many of us, start our day by reading the newspaper. Which everyone should do. But it does not happen due to habitual reasons or lack of time. Reading the news every day is one of the good habits. Since news can be read online at any time in this modern age, it has become easy for everyone. So in the midst of hundreds of activities, anyone can check the daily news if they want. Newspapers of any country cover the current situation of that country as well as current updates are available all over the world. Many have the habit of reading news from other countries outside their own country. This site is very important for them. From the newspaper list, you can get the latest breaking news about Andorra people, business, economy, EU politics, and economy. 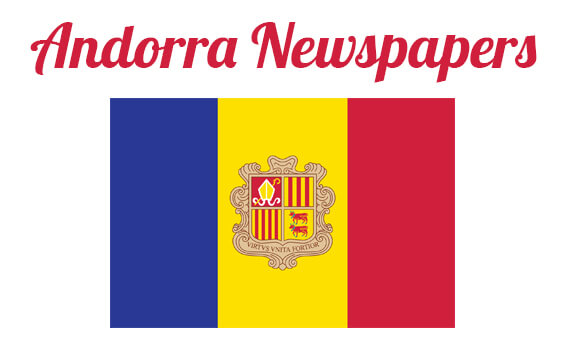 Each country operates its media sites in its own culture. And from there we can learn about the current update, situation, and other issues in that country. So newspapers play a very important role for any country.

Diari d’Andorra is a leading newspaper of Andorra. It was started its journey in 1991. It publishes all news in the Catalan language. The paper covers varieties of news such as national, culture, business, politics, education, and many more.

El Periòdic d’Andorra has its headquarters in Escaldes-Engordany. Natalia Mena is the General Manager of this paper. The direction of the writing department is Julià Rodríguez. It publishes politics, society, economy, culture, sports, and more. The management of the commercial department is Lucila Oliveira.

Ara Andorra is a daily newspaper. It covers different topics such as politics, society, culture, economy, and more. This newspaper prints its article on the Catalan language.

Bondia is a newspaper that publishes in two editions. One is Lleida, Catalonia, Spain and another is the Principality of Andorra. It was founded in 2006. Its daily circulation number is 15000.

Forum is a Catalan language newspaper. It publishes news such as sports, society, politics, economy, culture, and current updates.

Agència de Notícies Andorrana (ANA) is one kind of service center. Normally, it is a part of a news site that serves customers.

RTVA (Ràdio i Televisió d’Andorra S.A.) has two sites, one is a television and another is a radio. It operates an RNA, a radio station, & ATV, a television channel. Both media sites broadcast in Catalan.

Stay tuned to our site for details of Andorra Newspapers and to read news directly from the link. For those who are interested in reading the news of this state directly, there is a link to each newspaper.