Our website is basically a list of newspapers from different countries and a detailed description of the top newspapers. People who follow our website regularly can learn about newspapers from different places. Not only this, but we also provide links to every newspaper that mention here. Anyone who clicks here can read the news online from the website of that newspaper directly. We provide a brief description of the newspaper so that you can know the detail of that newspaper before clicking. In today’s post, we will discuss Iceland Newspapers & Latest News. Read the full post to know about all the newspapers here and get the link.

Iceland is a small European country that is also an island. It is the most peaceful country in the world where people are calm and crime is the lowest. It is a land of diversity and full of natural beauty and fascinating scenery. The country is populated with only 350,000 people and about 60% of them live in the capital. The main source of income for the country is the fisheries sector. The country nowadays earns a lot of money from the tourism sector. Although Icelandic is the official language, everyone here is fluent in English. So there is no problem with communication here. Coca-Cola drinks are more of a carbonated drink for every human being than in other countries. Icelanders watch more movies than any other country. Mosquitoes and others cannot be found here. Icelanders love to enjoy sports including hockey, football, volleyball, and horseback riding. 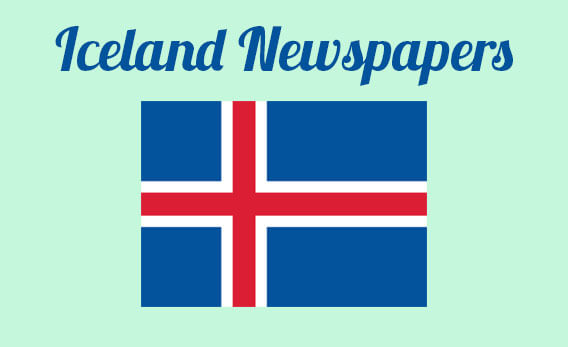 Morgunblaðið is a very popular daily newspaper. It was established on 2 November 1913 by Vilhjálmur Finsen and Ólafur Björnsson. Which was only eight pages long. Árvakur is the owner of this paper. The headquarter locates in Reykjavík, Iceland. Its website is a very popular website in Iceland.

DV is a tabloid format daily online newspaper. Frjáls fjölmiðlun ehf. is the owner of this paper. It was started its journey in 1981. Lilja Katrín Gunnarsdóttir is the editor of this newspaper. Since its inception, it has changed dramatically. It focuses mainly on astrology, sensational crime stories, and local and foreign celebrity news.

IceNews is a news outlet based in Iceland. It specializes in providing English-language news in the UK, primarily in the Nordic countries of Denmark, Finland, the Faroe Islands, Greenland, Iceland, Sweden, Norway, and elsewhere in Northern Europe. The paper covers current affairs, entertainment, politics, travel, culture, and forthcoming events. Most of the news is related to Finland, Denmark, Norway, Iceland, and Sweden.

MBL.IS is English language information and news site. It was founded on 2 February 1998 by Árvakur hf. It has consistently been Iceland’s most popular website since its inception. The focus is on domestic news with good coverage of foreign news, weather, business news, entertainment, sports, and lifestyle. It also runs for real estate classifieds, advertising in Iceland’s most popular site, and Morgunblaðið’s photo archives and news.

Bæjarins Besta is a leading news site in Iceland. All its news is mainly published in the Icelandic language. It covers news such as sports, culture, politics, current updates, and more.

Eyjafréttir is an Icelandic newspaper. It is a live medium with daily news and information about the life and existence of the Westman Islands. It was first published on 6 July 2000. The first news on its website was about the Flugfélag lands airfare increase.

Fréttatíminn is a very popular weekly newspaper. It was started its journey on 1 October 2010. It was featured every Friday and had a circulation of about 82,000. About 70,000 copies of which have been distributed in the Reykjavik capital area. It went bankrupt in 2017, the last edition of which was published on April 7 of that year.

Stay tuned to our website to learn about Iceland Newspapers from today’s post, and learn more about country newspapers.