In today’s post, we have described the top newspapers with links to Canadian Newspapers. Canada is a country in North America that stretches from the Atlantic Ocean to the Pacific Ocean. It is the second-biggest country in the world in terms of total area.  The eroded plateau of ancient rock in North America is called the Canadian Shield. This huge ‘V’ shaped region is the largest of the 11 Shield regions in northern Canada.

The lion’s share of Canada’s economy is made up of industries like other developed countries. Wood and mineral oil are Canada’s two main heavy industries. The automotive industry is one of the leading manufacturing industries in southern Ontario. The print media here is very developed and popular all over the world. You can see all the print media here online from any part of the world.

You May Also Read: Cameroon Newspapers 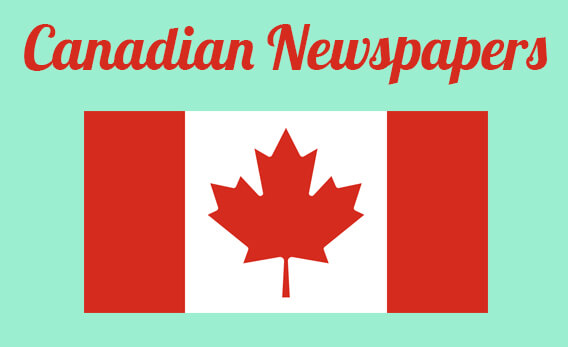 The Globe and Mail

The Globe and Mail is a national newspaper in Toronto. This daily morning newspaper publishes in broadsheet format. It was established in 1844. The Woodbridge Company is the current owner of this paper. Philip Crowley is the publisher and David Walmsley is the editor of this newspaper. Its political ideology is moderate economic liberalism. Its daily circulation number is 291,571 and Saturday circulation is 354,650.

The Toronto Star is the top circulation newspaper in Canada. It is a broadsheet daily newspaper. Toronto Star Newspapers Ltd. is the proprietor of this paper. Jordan Bitove is the publisher and Anne Marie Owens is the editor of this paper. Its political coordination is social liberalism. It features different types of news such as local, politics, sports, entertainment, business, and more.

Toronto Sun is a tabloid format newspaper. It was first launched on 1 November 1971. The political alignment of this newspaper is conservative. Postmedia is the current owner and Adrienne Batra is the chief editor of this paper. Its weekday circulation is 119,048, Saturdays 111,515, and Sundays 142,376.

Financial Post is a business newspaper in Canada. The foundation time of this paper is 1907 by John Bayne Maclean as weekly. Normally, it publishes all articles in the English language. The paper covers finance, economy, business, and national.

The first issue date of Vancouver Sun is 12 February 1912. Postmedia Network Inc. is the present owner of this paper. The paper features six days a week, Monday to Saturday. Harold Munro is the chief editor of this paper. It is still the biggest newsroom of any newspaper in western Canada.

Montreal Gazette is the only English newspaper that featured Montreal, Quebec. It was established on 3 June 1778 by Fleury Mesplet. Its political alignment is Canadian federalism, conservatism. Postmedia Network is the proprietor of this paper.

Postmedia Network is the owner of the Calgary Herald newspaper. It was started its journey on 13 August 1883. Edmonton Journal is the Sister newspaper of this paper. Lorne Motley is the editor of this paper. Its weekday circulation is 107,954 and Saturday is 101,725.

This article will help you to know about Canadian Newspapers and read online news directly from its website. Also, here you will find a detailed description of the top Canadian newspapers.